Ashtavakra Geeta is a dialogue between Ashtavakra and King Janak on the nature of soul, reality and bondage. It offers a uni-existential philosophy to understand duality. According to one version of the legends surrounding Ashtavakra, his father was once reciting the Vedas, but erred in correct intonation. The fetus spoke from the womb and asked his father to correct the eight mistakes that he was doing while reciting the Vedic Mantras. The father got angry and cursed him to be born with eight deformities, hence the name ‘Ashtavakra’.

One story is that Ashtavakra’s father Kahoda participated in a debate of science and wisdom held in the court of King Janak. Story goes that his father Kahoda was facing a tough challenge and was being defeated in the debate by Vandin in a battle of words. When Ashtavakra entered the court, everyone started laughing because of his deformity he had a very awkward gait. He introduced himself to King Janak and said that he would like to assist his father in the debate, but naturally that request was declined. Anyway the story goes that all the other present laughed at Ashtavakra, Ashtavakra then faced the King and told him that this cannot be the congregation of wise men as they are affected by what they see in my outer form but failed to see that which is within me is also within them. He was merely 12 years then and walked away from the court. He left a deep impact on King Janak’s minds. The court ended but the statements of Ashtavakra kept humming all night in the ears of the King. The next day King Janak got up early morning and started off on his daily round of his kingdom and by coincidence bumped into the young boy. When he finally found the young boy, this time the King did not waste any time and bowed down to him and requested him to share the knowledge and the wisdom of life.

It talks about the seed of existence that is preset in each one of us. Ashtavakra Geeta basically declares every human being to be a temple for the one who is the creator of this universe and his qualities are

Ashtavarka declares that humans are embodiments of pure Consciousness “Chaitanya”. It is the modifications of the mind and the fear to let go, that come in the way of this realization.The realization can happen any moment, that moment when the individual is ready mentally and internally. Desire, expectation, attachment, rigidity and duality of the mind, self imposed sense of duty (doership) and knowledge are the greatest hurdles to Liberation.

It shall be my attempt with my friend and colleague Mrs. Mrudula Kulkarni to decipher the Ashtavakra Geeta in english as closely as possible, using simple english language.

THE START OF THE CONVERSATION: 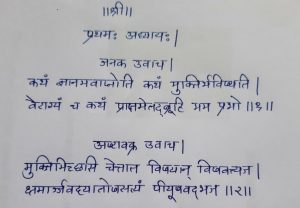 In the above dialogue, King Janak asks Ashtavakra to share with him the sacred knowledge of how one can attain Mukti (Liberation) and Vairagya (being dispassionate).

Ashtavakra replies: Dear,  if you wish to be Liberated then you should let go of the Vishaya (Indriatrupti (sense gratification) / vaasana (addictions)) as poison and adopt and practice kshama (forgiveness), santosh (contentment) and truth as being the nectar of life.

Ashtavakra says, that is the simple secret of experiencing liberation and becoming dis-passionate.

*It must be noted that Ashtavakra is speaking to Raja Janak, who is a King and is probably entering that stage of his evolutionary life which is defined in the Vedas as Ashrama. A-shrama (life without labor), this is when the seeking usually starts and one may realize the truth in a moment or may have take a few more lives before realization dawns. It all depends on the mental and the internal readiness of the individual. 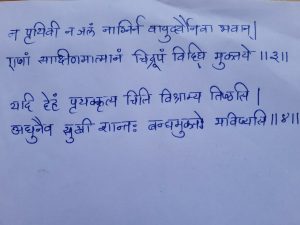 Ashtavakra further adds: You are neither of the five elements that the universe is made of i.e the earth,water, air, fire and the sky. You are consciousness and a witness to all that IS. Ashtavakra adds : If an individual succeeds in separating the mind from the body and establish a RESTFUL state of MIND in the present moment, then immediately the individual will experience peace and harmony and that shall become the foundation for the individuals liberation in the future and the stepping stone to moksha. Liberation is the pre-cursor to Moksha. 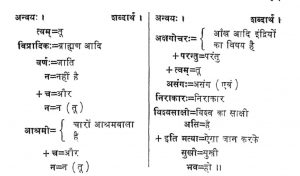 Ashtavakra further adds : You are NOT (Vipra – Brahman) ; Vipraadhik (Or Similar Castions), you are not the one who ages , you are not the object as seen by the senses and you are neither a part of any group. You are the eyes (witness) of the Nirakaar (Formless) that is simply a witness to this universe. Stay peaceful knowing this TRUTH. 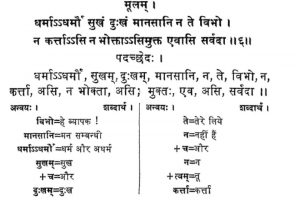 Ashtavakra further adds ; Dharma/ Adharma, happiness and sadness are all modifications of the mind, you are neither the doer, neither the enjoyer. The TRUTH is that you are always free spirit. 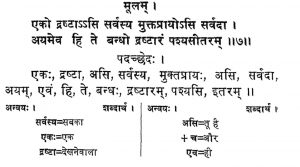 Ashtavakra adds: There is only one who sees and that is you, and therefore you are Truly Liberated, however your hold back is that you see the others as Seer. This is a very profound statement and basically establishes that fundamental TRUTH that everything else is an illusion of the mind. 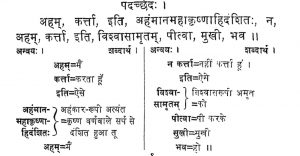 Ashtavakra adds: It is the greatest delusion that you suffer from that you are the DOER (It is the egoic snake that is terrorising you). Rest in peace knowing the nectar of truth that you are not the DOER of anything. 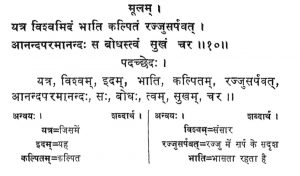 Ashtavakra adds: It is the mind that see’s the snake in the rope. The one who understand the modification of the mind are the cause of fear, such a person can stay peaceful and roam freely in this world. Ashtavakra adds: You are the witnessing Spirit , it is all pervasive , it is complete, it is unified, it is free, it is consciousness , it is free from doership, it does need to be in a group , it is free of desires, it is peaceful, however due to illusion it has identified itself with the universe.

This is a work in progress and the content will expand, additions will be added under new dates.

Mrs. Mrudula Kulkarni is an expert in Sanskrit Language and a Yoga Practitioner. Her contact details are at the end of the blog.Other references: Ashtavakra Geeta by OSHO and Ashtavakra Geeta by Babu Jhalim Singh. This is for those friends of mine who cannot read Hindhi and Sanskrit.Mrs. Mrudula Kulkarni can be contacted : +91 9225612568 for Sanskrit and Yoga Classes.webhandle : AantareekByRadha